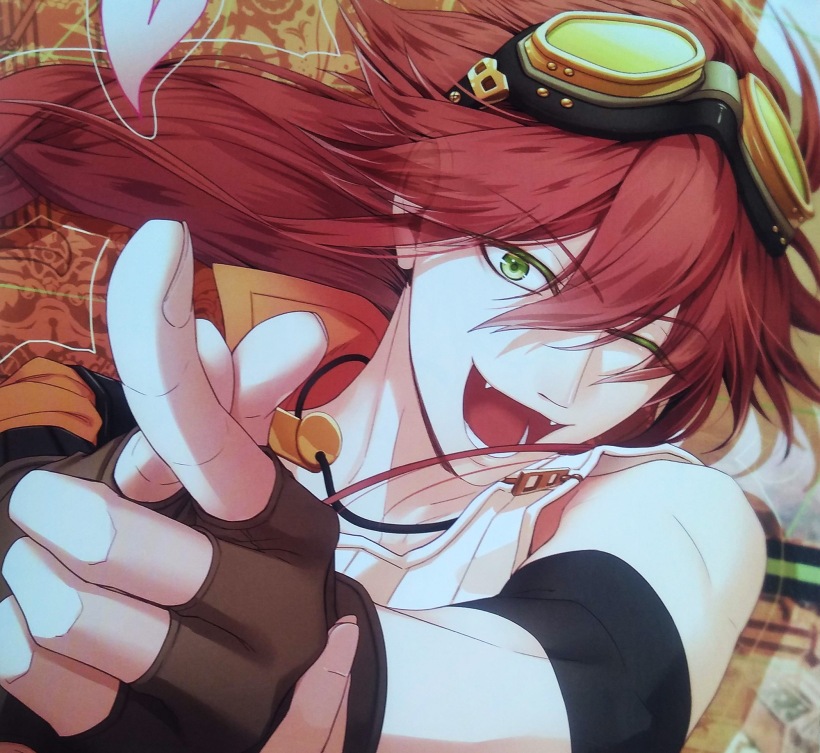 The last part of the series of the design of the five main male characters of “Code: Realize – Guardian of Rebirth (コードリアライズ Code: Realize ~創世の姫君~)” is finally here! The energetic and carefree Impey Barbicane is the one who has the honor of completing this series.

Before continuing, as I always say, for whom this is the first post you read on this topic, I suggest reading at least the part 1 of this series, since I’m going to use some references about Steampunk that have already been explained in it.

So, after giving this little advice, let’s finish this series with the fifth part of “Code: Realize – Character Design Analysis”!

Impey Barbicane is a personage created by Julio Verne. He had his first apparition in 1865 in the novel “From the Earth to the Moon” as an American magnate and president of the Baltimore Gun-Club. Verne presented him as a manufacturer of cannon shells that has been enriched after the American Civil War. However, because the war ended, he and his club had a lot of free time, so they decided to send a projectile to the Moon through a gigantic cannon.

He and the French pilot Michel Ardan agreed to make the journey together, but in the next book of Verne, “Around the Moon”, it’s known that they only reached a Moon’s satellite. The good part is that they had the luck of seeing, for a couple of seconds, the hidden face of the Moon thanks to an outburst of a fireball. This way, they discovered the remains of an ancient civilization.

Impey Barbicane is a character described in detail by his creator. In “From the Earth to the Moon” is mentioned that he is:

“[…] a man of forty years of age, calm, cold, austere; of a singularly serious and self-contained demeanor, punctual as a chronometer, of imperturbable temper and immovable character; by no means chivalrous, yet adventurous withal, and always bringing practical ideas to bear upon the very rashest enterprises […]” [1]

With this first fragment is possible to realize that the original Impey Barbicane has very little in common with the one in the Otome that is being talked about in this post. The only adjective that can be retaken would be the “adventurous” one.

Verne completes the last description with these words:

“He was personage of the middle height, having, by a rare exception in the Gun Club, all his limbs complete. His strongly marked features seemed drawn by square and rule; and if it be true that, in order to judge a man’s character one must look at his profile, Barbicane, so examined, exhibited the most certain indications of energy, audacity, and sang-froid.” [1]

It seems the designers of “Code: Realize” were inspired by another resource to create Impey Barbicaine, nevertheless a little of the essence of Julio Verne’s concept prevails by establishing that both the Otome and the literary figure, are adventurous, energetic, audacious, genius engineers and have the wish to reach the moon.

Having clarified this, it’s time to look further to find that other means and resources serve to explain the design of the Impey Barbicane in the Otome “Code: Realize”.

As said in previous posts, the Otome “Code: Realize – Guardian of Rebirth (コードリアライズ Code: Realize ~創世の姫君~)” is mainly inspired by the different expressions of Steampunk. With this in mind, it’s easy to distinguish how Impey is a clear representation of two classic stereotypes of this movement: the engineer/inventor and the pilot. Somehow these stereotypes, which also work as his roles in the video game, came from Julio Verne’s original creation.

This information leads to understand the use of goggles on the head as an adornment, since in the world of Steampunk they are used by the aviators to protect their eyes of bug strikes at high altitudes, from the wind and from the weather conditions. The same with engineers, the eyes must be protected from flames, sparks, chemical splashes, etc.

In history, during the 19th century, goggles were used by the working class and by the people who rode in a horseless carriage. They were the first windshield.

Impey plays the engineer role too, so one element can’t miss is the black boots. They seem to be inspired in the so-called “engineer boots”. This kind of boots is typically made from thick, stiff, full-grain bull hide. The leather is oiled to add durability, hence its brown or black color. Although they were created between 1930 and 1940, they were influenced by the harness boots produced in 1860. Also, as said in Count of Saint Germain analysis, the boots surpassed shoes as the fashionable footwear for men during the eighteenth and early nineteenth centuries, so they give Impey the Victorian touch.

In view the leather is a common material in the Steampunk culture, Impey has this material gloves, which have the function of protection, and a leather bag to have his tools at hand.

When talking about Steampunk, a little the actual times have to be seen in the outfit. In Impey case is… the flashy orange overall. The real purpose of the creation of this kind of garment was to give the men and women in the industry area a way to protect their everyday clothes of dirt. But the most modern element is not the overall, but the orange color. This hue is called “safety orange” and it’s used in attires where the objective is to achieve a high visibility. So, as an engineer who has to think in his protection, wearing this color is indispensable and… to be honest… this flashy hue fits perfectly with Impey personality.

Well, following Julio Verne description, Impey Barbicaine is American. This raises the question of why the red hair and the green eyes. Statically talking, one to two percent of the human population has red hair, same for the green eyes. So, the combination of these two features is very rare, provoking a lot of myths and beliefs behind the persons who born with these characteristics. The belief that best suits the red hair and the green eyes of Impey Barbicane is the one from the medieval era. (The spoiler begins here) Montague Summers, in his translation of the Malleus Maleficarum (the best known treatise on witchcraft) notes that these features were thought to be a sign of a witch, a werewolf or a vampire during the Middle Ages:

Those whose hair is red, of a certain peculiar shade, are unmistakably vampires. It is significant that in ancient Egypt, as Manetho tells us, human sacrifices were offered at the grave of Osiris, and the victims were red-haired men who were burned, their ashes being scattered far and wide by winnowing-fans. It is held by some authorities that this was done to fertilize the fields and produce a bounteous harvest, red-hair symbolizing the golden wealth of the corn. But these men were called Typhonians, and were representatives not of Osiris but of his evil rival Typhon, whose hair was red. [2]

This quote helps to conclude how the designer of “Code: Realize” wanted to give us a clue about the real origin of Impey Barbicaine since the moment he appeared in the scene.

And to finish this analysis, let’s talk about the element all the five main characters of “Code: Realize” have: an emblem. Remembering, Lupin’s emblem is the key, Victor’s is a flask, Van Helsing’s is a crucifix and Saint Germain’s is a clock. For Impey, who is an engineer always thinking about building and assembling, the ideal gadgets to be his emblem are an open-end wrench, which is always a tool Impey has hanging in his bag, and a slip joint pliers.

Impey uses his emblem in his belt as decoration. This has the two instruments, mentioned and illustrated before, in a crossed way. Behind them, at the upper and right part, there are gears which are the Steampunk touch of this ornament. Finally, at the right part, the design is completed with a fragment of a steam pipe since the term “Steampunk” came precisely from the idea of a world where the principal technology is steam-powered.

Phew!! This was a long way, but this series is finally over! I hope I didn’t bore you with a lot of posts, but I really wanted to do a very detailed analysis of each character, not only to offer you a good post, but also to acknowledge all the hard work of the creators and designers behind these personages.

And I realized this month we commemorate the first anniversary of “The Picky Champy”. I’m soooo happy!!! I want to thank all the people who read my publications, and who follow my blog and Facebook. Maybe I don’t get many, but with each “like”, I feel motivated to continue. I will continue to strive to bring interesting posts. But for now, see you in my next post!

[1] J. Verne, From the Earth to the Moon; Chapter 2, President Barbicane’s Communication.

Nilda Chan~npy I'm a Graphic Designer in love with Otomes and JRPG. I like the interface design area and that's why I really like to talk about this theme. You can win me over with a good videogame Illustration book and a good capuccino.